Availability of your website is fundamental in maintaining the reputation of your business; customers expect to access information about your products and services at any time of day. Whether you are earning on your website directly or use it as a compliment to your business, your profits are connected to your website’s responsiveness. StormWall’s DDoS protection for websites guarantees consistent performance of all your organization’s web resources. Using proxy technology, the service inspects all inbound and outbound traffic, ensuring 24x7 website availability. Our solution also offers automatic caching of static content (images, styles, fonts), which will make your website more reliable, run significantly faster, and perform better. This is all included in our service with no extra costs!

99,2 %
Ideal for
Most effecient solution for business
More about the plan
300 $
per month
Enterprise ONE plan
For mission-critical websites and applications
Number of domains
1
up to 100 subdomains
HTTPS support
Websocket support
Dedicated IP address
1
Included legitimate bandwidth (excess allowed)

99,5 %
Ideal for
For mission-critical websites and applications
More about the plan
By request
per month

Who is the service for

The website must work stably - this is a matter of the company's reputation, because customers need the ability to receive information about products and services at any time of the day or night.

If the site is used for e-commerce or mass provision of content to users, then profit directly depends on its reliability and availability.

Protecting a website from DDoS attacks using the StormWall service is equally effective for both small companies and large corporations.

01
Two thirds of the world's companies are exposed to DDoS attacks every month. They affect the web resources of companies of all industries, government agencies, payment systems, financial and medical organizations, the media, online stores, coupon and game services, cryptocurrency exchanges, as well as equipment connected to the Internet (Internet of Things, IoT).
02
The reason for blocking the work of your site can be the personal enmity of intruders, attempts to extortion, blackmail, the order of unscrupulous competitors, the actions of political radicals and even the entertainment of hackers.
03
Website owners who fail to protect against DDoS attacks risk losing customer confidence, company competitiveness and profits, and the resulting downtime resulting from an attack can cost millions in losses.
04
Attacks are also used to divert attention from attempting to take over your company's database.

Advantages of the StormWall service over other solutions*

*Upon request, we will provide a comparative analysis with other solutions
Contact our chat 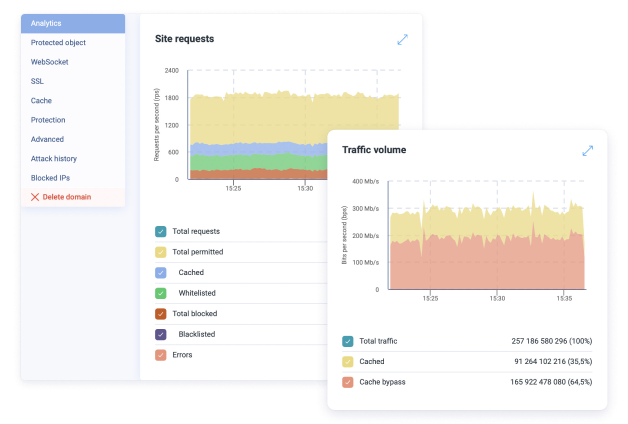 Continuous improvement of the cloud security platform by our own team of experts, which allows us to meet fully armed DDoS and hacker attacks of different nature and intensity
Connection to the service within 10 minutes without transferring the site
Convenient and intuitive control panel
An advanced world-class DDoS protection service using artificial intelligence, which is responsible for detecting abnormal traffic, predicting an attack and determining its likely scenario
Expert technical support 24x7 with a reaction speed of no more than 15 minutes
Guaranteed availability of the protected web resource. All working conditions are spelled out in our contract 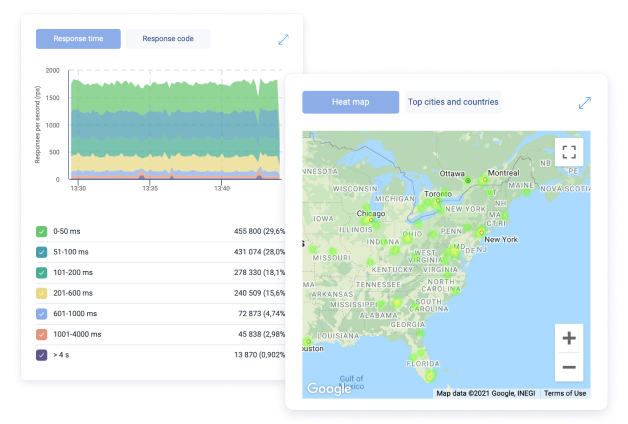 What your company will get

Reducing the load on web servers and filtering any DDoS attack.
Speed ​​up websites
Optimal plan with monthly payment
No additional costs for hardware and software

How StormWall site protection is connected

01
You get a secure address in the StormWall cloud
02
Redirect the site's DNS record to it
(independently or with the help of StormWall specialists)
03
The traffic coming from your website visitors is checked, filtered and optimized. Attack traffic is blocked.
04
Only "cleaned" traffic is sent to your server, with the real IP addresses of visitors stored in the HTTP header.

How we ensure high-quality service

Distributed infrastructure
Our infrastructure is built disaster-resilient from the ground up, so an event causing outage of one point-of-presence will not lead to a connection loss. How is it achieved?

Thanks to the use of the Global Session technology, if one of the nodes is unavailable, traffic is automatically directed to another node closest to the client.

Points of presence in Europe, USA and China and the CIS provide minimal latency for customers from different continents.

The FlowSense system constantly monitors all data streams going to the client's server, monitors anomalies and automatically detects the type of attack.

The protection parameters are then dynamically adjusted for this type of attack using BGP FlowSpec (RFC 5575) and our system API.

Under the protection of StormWall, the site will work faster, as large files are automatically cached in the RAM of our servers and delivered to clients instantly.

Our HyperCache technology relieves a significant part of the load from the server, allowing it to do only "useful work", and the site - faster to respond to requests.

Use the service by choosing one of three work options:

With the help of a consultant
Chat with our online consultant or call us.
Our experts are always online, available 24x7 to help you connect in just 10 minutes.
On one's own
Choose a suitable payment plan and click «Order».
You then will be able to take all the necessary steps to enable and configure protection on your own.
Send a request
Fill out the form
and our manager will contact you during the working day.

We have been working at the international market since 2013.

During this time, we have implemented more than 8000 projects in 60 countries.